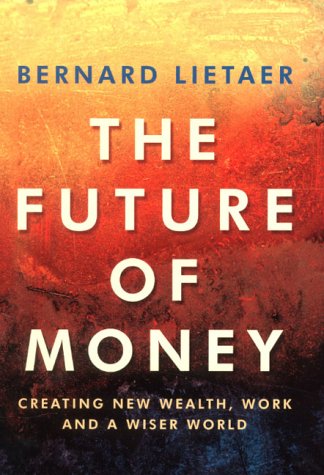 The Future of Money:
Creating New Wealth, Work, and a Wiser World

The following bullets are reality-checks extracted from The Future of Money (published in January 2001, also available in German from http://www.futuremoney.de), illustrating the dramatic changes we face in the near future.

All of the above is part of an irreversible process of change in our money system and our societies. We are now in a transition period, an interval of great risk but also of great opportunity. The risks are not only financial, some of the emerging money technologies could create a society more repressive than anyone of us thought possible. More importantly major opportunities are also becoming available: now more than ever it has become possible to address some of the most critical issues of our times, such as enabling more meaningful work, fostering cooperation and community, even realigning long-term sustainability with financial interests. None of this is theory, real-life implementations have pragmatically demonstrated such results. Combining these innovations can make available a world of Sustainable Abundance within one generation.

Specifically in Europe, the traditional ways to handle unemployment are increasingly failing. In areas with high unemployment, people have already demonstrated that living conditions can be significantly improved by creating their own complementary currencies instead of just relying on welfare. Surprisingly, it is in fact not the first time that such solutions have been successfully implemented in the Modern world. During the 1930’s many thousands of such initiatives were operational in the US, Canada, Western Europe and other areas affected by the Depression. Complementary currencies could become a key tool to buffer a region from the shocks caused by failures and crises in the official money system. Finally, this approach is a win/win for both locally owned businesses and society at large.

The degradation of the environment due to short-term financial priorities can similarly be addressed with pragmatic money innovations. Short-term thinking is shown not to be due to human nature, but to the prevailing money system. It is also possible to reverse this process, by using a currency designed specifically for multinational trade and contracts which would make long-term thinking a spontaneous process, focusing the attention on long-term sustainable solutions without the need for regulations or taxation. Historical precedents have proven such results, some of them lasting over several centuries.

Chapter 1: Money - The Root of All Possibilities

What is Sustainable Abundance?

A Road Map to Your Money, Your Future

PART ONE: What Is Money?

Synthesis of Part One

A Primer on How Money Works

How does Banking Work?

Central Banks and Other Firemen

Money as a System

The Firemen’s Viewpoint
Back Full Circle to You

Where is the money mystery coming from?

A Working Definition of Money

The Origin of Money’s Power

Four Key Design Features
The Effects of Interest
What next?

The Nature of Information
Implications for the Economy and Society

Implications for Banks and Financial Services

Wisdom in the Information Age?

Chapter 4: Five Scenarios for the Future

Scenarios - Windows on the Future

The Official Future: "More of the Same"

Why the Official Future is Not Going to Happen

Timetable for the Transition

How is this Possible?

The Four Scenarios in Perspective

Complementary Currencies in the Information Age

Elements for a European Social Policy for the Information Age

How to Start Your Own Complementary Currency

The Three Tools of Persuasion

A Global Reference Currency (GRC) and the Terra Unit

Terra as a Business Initiative

A Visit to the Stanford Campus

Towards an Integral Economy?

The Three Waves toward Sustainable Abundance

A Monetary System for Sustainable Abundance

The Four Seasons of 2020 Revisited